In 2020, we want to trial ongoing leaderboards for select tournament series with the goal to develop further narratives within the SC2 League over the year.

Players and fans alike have been able to follow daily updates of who the top online players are based on results of our 500+ tournament league over the course of each year via our ongoing World Rankings. For 2020 we thought it would be interesting to try and take that further yet again to see and track results from specific events!?

Our hope is that these new leaderboards will add further incentive to play as often as possible, by giving players another target to achieve, as well as increasing both familiarity and friendships with your ‘regulars’. On the flip side, narratives such as building healthy rivalries/competition between those regulars and oneself, tracking their and your own results week to week for leaderboard standings, and giving you ‘regulars’ from within your tournament series to cheer for against other opponents in other events (Such as in the mid season playoffs mentioned below).

We also want to trial (3) Mid Season Qualifiers/Playoffs for our OSC Season 8 Championship, keeping the Championship front and center of mind and a target throughout the year, rather than a late season rush to secure seeding and qualify as sometimes occurs in the past.

Each Playoff winner is guaranteed a top 20 seed in OSC Season 8 Championship!

Leaderboard ‘mini seasons’ should run about 3.5 months, with playoffs to follow each. 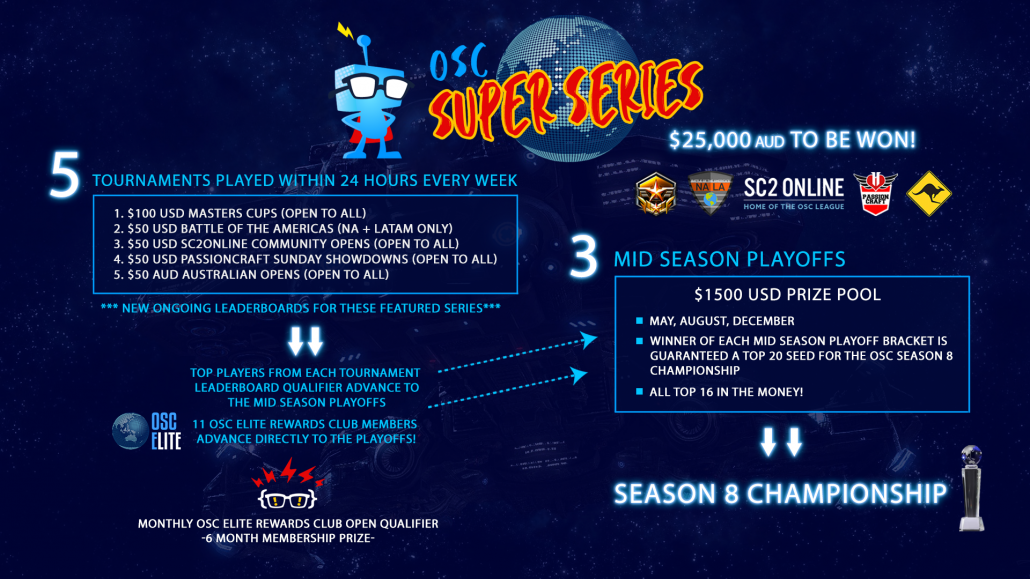 All these regular tournaments are played within 24 hours of each other, over the weekend, covering all regions/time zones! A huge day of SC2!

At the end of each one-third point of the OSC season, the top 4 players from each tournament leaderboard will compete against each other for a spot in the $1500 playoffs.

Those 5 tournament leaderboard qualified players will then be joined by 11 OSC Elite Reward Club Members (Top 4 from OSC Rankings, 3 from Qualifier #1, 3 from Qualifier #2, + 1 from a Random Draw) in the playoffs. All top 16 will be paid!

We will also be running a monthly OSC Elite Rewards Club Open Qualifier (6 month membership prize) for SC2 players, open to all non members, or current members whose memberships are expiring in less than 2 months. We will mix up when these qualifiers run, to accomadate all player regions.

Why only those 5 series/What about the rest of the tournaments?

This is a trial. A League wide sample size is a big undertaking, and we feel an unnecessary one to test our goals. We have deliberately selected a mix of cups across all timezones, specifically over the weekend, electing to include 2 long running franchises (Masters Cups + SC2Online Community Opens), a weekly rework of a popular 2018 regional idea (Battle of the Americas), an open challenge to vs players from our traditional home base on their turf (Australian Open), and replacing the fan favourite Sunday Heroes series with a new weekly from an EU staple brand with a large following (Passioncraft).

All your other favourites will still run as per the last few years, just not a part of the Super Series at this stage. The Super Series is just a small section within the greater League circuit.

We also feel that 5 is a good amount of leaderboard seeds to begin with, and will be filling the remaining playoff positions from our dedicated members in the OSC Elite Rewards Club. Another perk of joining the club!

If need be, one or more of these new series can be replaced for another after each mid season playoff.

If the ongoing leaderboards prove to be as successful as hope, we may expand the format to include all regular League events. Possibly later in the year, but more likely 2021.

Info on the Super Series tournaments:

(Super Series will start the weekend of January 25th 2020)

$50 Battle of the Americas

Battle of the Americas leaderboard points towards Super Series qualification:

*Tournament times may change depending on daylight savings, admin/caster availability, or to avoid clashing with major offline events.

New Points Change for ALL Open Tournaments + Qualifiers in 2020:

We’re always on the lookout for ways to improve our rankings system, and research into other sports has found one such addition that might do just that for 2020. We shall be bringing in new bonus points for the top placing players in each cup, strictly based on the size of the playing field that cup.

The rationale behind this is the bigger the tournament, the harder it is to place highly/win. For instance placing top 8 in a 50-60 player cup, is more difficult than a 20 player cup. And sometimes we see fluctuations week to week even within the same tournament series. Prior to this points for placing have been the same, regardless of bracket size.