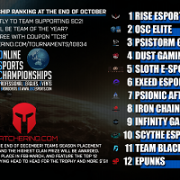 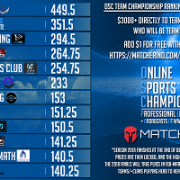 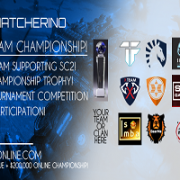 The OSC Team Championship Season ran from April 2017 until the end of November. Over those 8 months we saw players from many teams and clans boost their tournament activity, not only for personal gain and practice, but also to acquire points for their team/clan towards the Team Championship Rankings!

Despite being only a trial edition, with a modest $6000 starting prizepool, we were pleased to see teams recruiting more players based off their tournament activity and results/be a factor in recruitment, seeing increasing value of players when combining the Team Championship with the larger OSC World Rankings and associated data from the main league itself. We reason the Team Championship was a positive contributing factor in OSC’s 22.5% participation increase on 2016, and players hitting record totals!

The season prizes for top teams and top clan have been set since the end of Novembers rankings, and now after the end of year break, and our OSC Player Championship complete, it’s time for the top 12 ranked registered teams/clans to face off in the finals to determine who will be the team of the year, and take home the engraved trophy (along with additional $ prizes). The prizepools for both season and finals can still be increased via the Matcherino Page stretch goals (We’ll have new coupons coming soon as well).

Big shoutout to Peppy + Seigifried for serving as Project Managers for the Championship, making sure the database was updated with all player changes, and liaising with team managers. Peppy even went so far as creating a live tracking site to make it easier for all to follow (He has some some cool improvements coming for 2018!). And thanks to all the teams who’ve expressed positive feedback from what we also think has been a great trial edition for a team based championship. We got more players competing in tournaments, and more players supported by teams, mission successful/complete! Now let’s crown our champion! 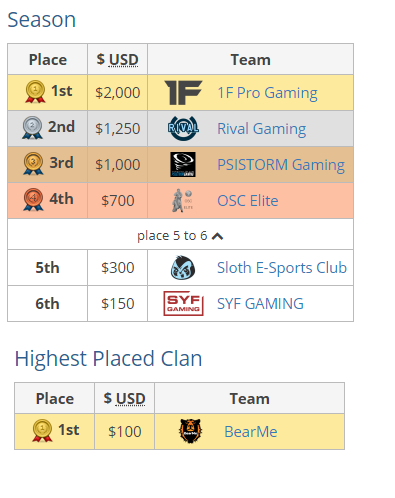 The top 12 Registered Teams/Clans after the November season lock are:

We have created a head to head points based series that incorporates both All Kill and Proleague formats. There is less emphasis on all kill (while still showing that fun format) ensuring at least 3 players are fielded from each team, limiting teams getting by with one super ace, and encouraging deeper rosters/more players supported/showcased. The bracket has also been setup to reward the top 4 teams/clans from the 8 month season, by seeding them in the upper bracket, with the next 8 seeds spread out down the lower bracket.

Pt 1 + Pt 2 are played back to back in what should be a great couple of hours for fans to enjoy, streamed on our OSCesports twitch channel.

Teams/Clans are to nominate one ‘coach’ pre gameday who will be available throughout the series, and be responsible for/decide all player selections, and work with the match admin. *Coach may be anyone from the organisation, including a player.

Teams/Clan coaches are required to communicate their next player selection to the match admin within 5 mins of the previous games conclusion, with the expectation that the nominated player is ready to start asap.

Only approved casters are allowed to spectate games.

Teams/Clans will be allowed to field an ex-player who was on their list at the end of November lock (eg PandaBearMe for Clan BearMe, ByuN for Team expert, Optimus + FeaR for deadpixels, Ascarecrow + JackO for 1FPro), should that player agree to play under their banner for the finals, and is currently not on a team competing in the finals. Any queries regarding ex-player eligibility contact OSC via email (OSCSC2@Gmail.com), or try the Team Championship Project Managers, or Eddie directly.

Teams can use players added after Nov 30th, if the new player has a contract with them for a minimum period of six months. Clans can only use their teamless players on the squad at the November 30 season lock.

In the unlikely event of both teams ending level on points at the conclusion of pt2, a Set 5 tiebreaker will be added. Any player can be revived as ‘ace’ in Pt2 Set 5, except the last 2 players used in Set 4. 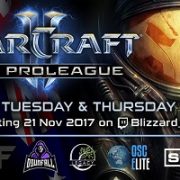 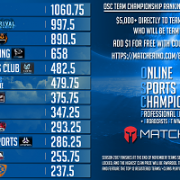 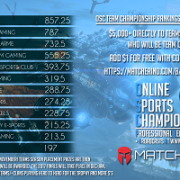 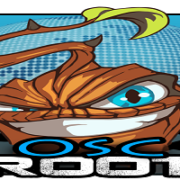 We are sad to inform OSC-ROOT fans that as of today July 5th 2017, at the conclusion of one years partnership, OSC-ROOT has been dissolved. We part on good terms, unfortunately, as can often be the case, partners involved have different future plans, expectations, and focus in mind going forward, and as such, have elected to mutually part ways at this point.

Assisting players closely and seeing them succeed is a core goal of OSC, and under the OSC-ROOT Partnership we were able to take that to another level, and post dissolution, we will look to replicate a similar model of our own moving forwards!

We are committed to offering financial support to any players left teamless after the OSC-ROOT Partnership. If they’re interested in continuing with us post dissolution under a new title, we’d love it and openly welcome them, while also beginning the search to find new talent to support and represent our community. We’ve already had players commit, so expect to see team and player announcements over the coming days and weeks!

Our understanding is that ROOT GAMING intend to reinstate their SC2 division. We’re sure confirmations of players will be announced on their end in the near future. They are a great group of people, and we wish them every success 🙂 #ROOT4ROOT

We thank all partners, players, fans and other parties who helped make OSC-ROOT the great team it established itself as from July 2016-17 (Currently ranked 1st in OSC Team Championship, and came 1st in Dust League season 4, amongst countless other individual player victories!) 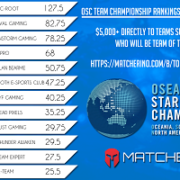 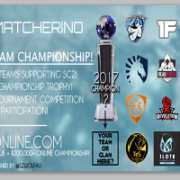 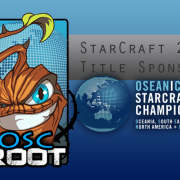